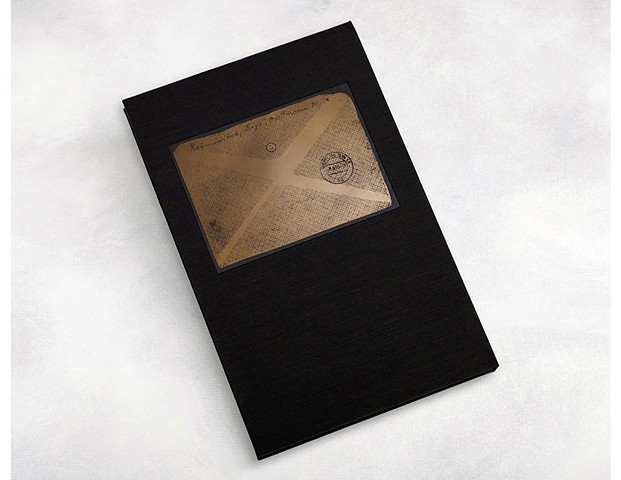 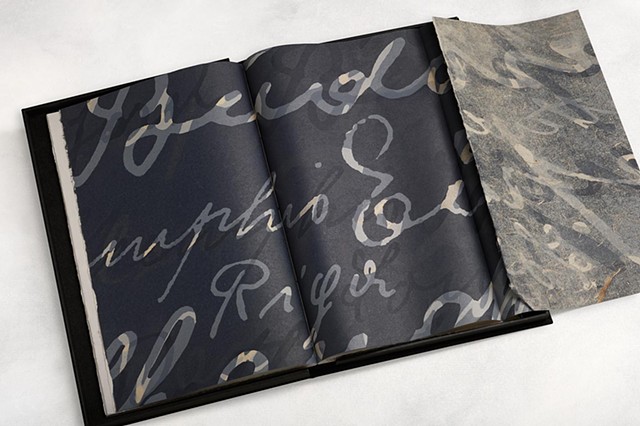 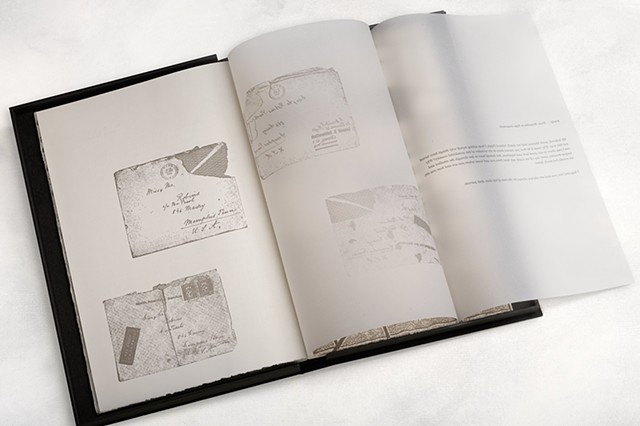 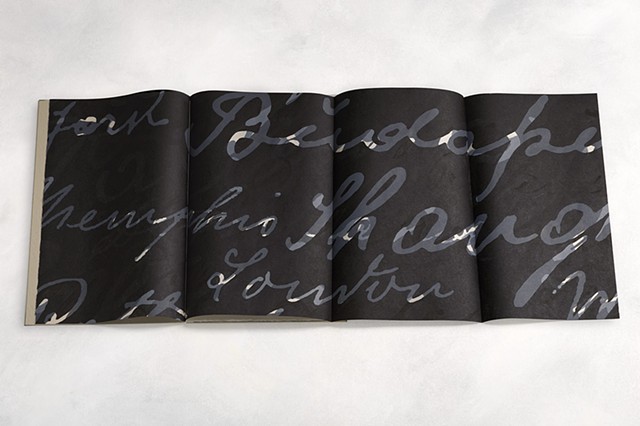 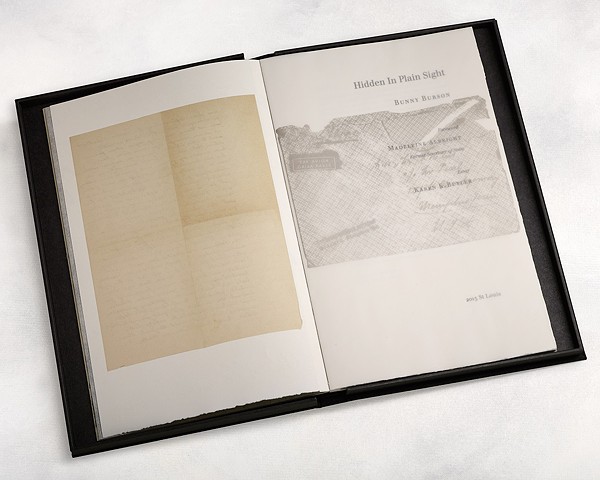 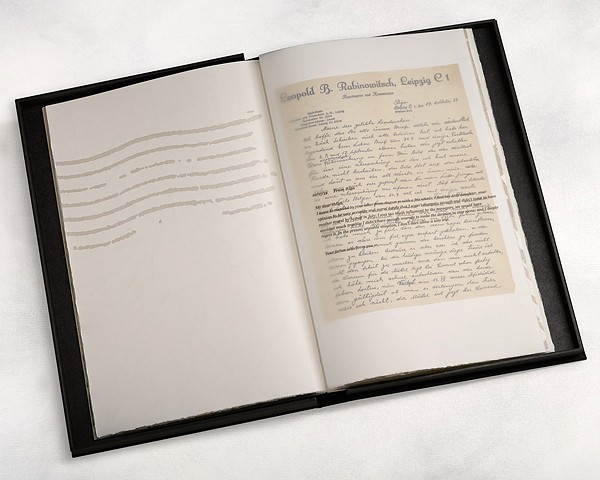 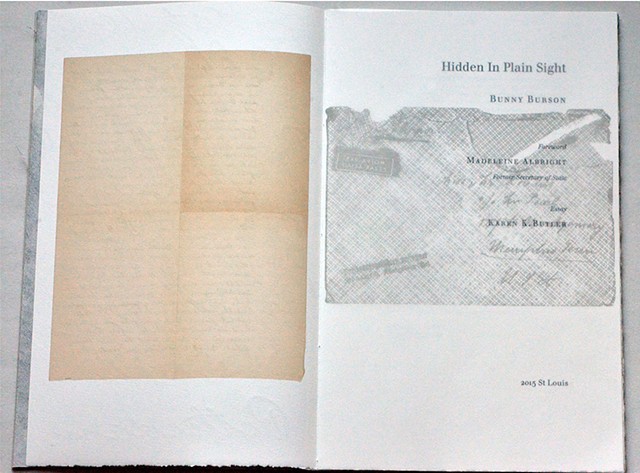 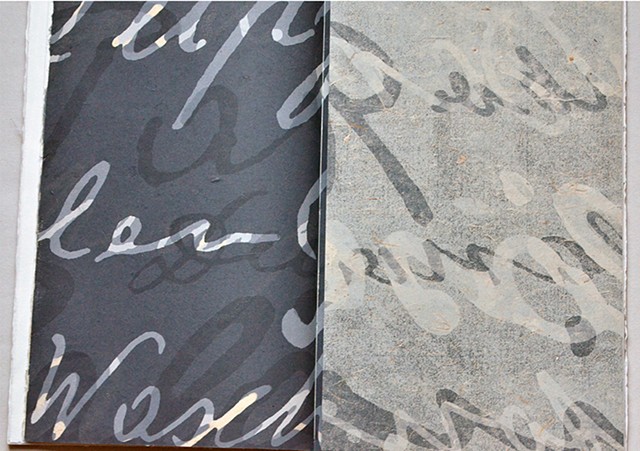 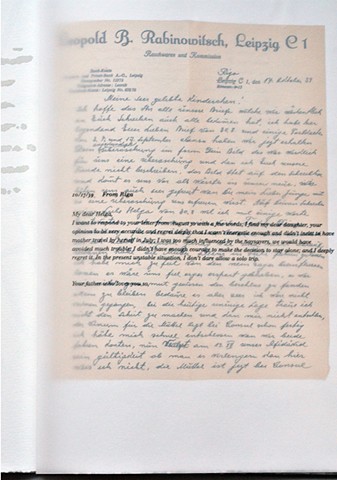 Bunny Burson's Hidden in Plain Sight deeply engages with a particular form of writing—the private correspondence exchanged between the artist's grandparents and her mother during World War II—while also enacting a form of storytelling in its own right. The book takes up the very personal act of writing and, by extension, reading as its subject and in so doing becomes an exploration of the ambiguity and impermanence that is at the heart of communication itself as well as a singular attempt to commemorate and come to terms with loss.

The title of the book, Hidden in Plain Sight, refers to a group of over one hundred letters written by the artist’s grandparents to her mother between 1939 and 1941, which the artist found in 2009 in her family home where they had been stored for decades. The letters were written in German, a language that Burson does not read. When she had them translated, the letters opened a window onto the lives of her mother and grandparents, revealing the story of her grandparents' last years during the war and precious details of their daily lives that she had never known. In 1938, Burson’s grandparents, German Jews living in Leipzig, sent their two children, a boy and a girl (Burson’s mother), to the United States in an effort to protect them from the increasing restrictions on Jewish life and activity in Germany. The letters, which were sent to Burson’s mother in Memphis, detail the efforts of Burson’s grandparents to leave first Germany, and then Latvia, before their deaths in 1941.

Fragments of these letters have appeared in Burson's work since 2009 as she has sought to make sense of her family history. Hidden in Plain Sight, a title Burson has used for the body of work that deals with these letters, which includes printmaking, sculpture, and now this artist's book, both offers access to the letters in an immediate way and presents them as an experience of discovery and loss that can never quite be fully comprehended. Three letters translated here in their entirety, one each from Burson's mother, her grandmother, and her grandfather, written between October 1939 and August 1941, form the core of the book. The very last letter of the three, from Burson's mother in Memphis to her mother in Riga, Latvia, was returned to sender, and it both ends the correspondence and raises the unanswerable question of what might have become of its intended receiver.

The book as a whole pays tribute to these letters as an aesthetic form of coming to terms with the past. And it is here that Burson's own work as a printmaker takes shape. The book consists of a complex interweaving of reproductions of various elements from the original letters—actual pages from the German letters, English translations, and imprints of their envelopes—and original prints by Burson that take up and rearticulate aspects of these letters. It is both an homage to the original letters and the history enclosed within and a response to them. Interspersed throughout the book are foldout lithographs inscribed with names of cities, such as Budapest, London, Memphis, Moscow, New York, Paris, Rotterdam, and Shanghai, that appeared in the letters. Often these were places the authors hoped to reach for asylum or places the children stopped on their long journey from Leipzig to Memphis. Burson speaks of how her feelings about these places changed once she discovered the letters—from destinations once representing the simple potential for adventure and discovery they became complex symbols of first hope, then homelessness, dislocation, and eventually despair. To evoke this experience of ambiguity and loss, Burson meticulously layers delicate paper with these semi-legible words, creating an evocative palimpsest from the numerous place names that appeared in the letters. Cumulatively, the piling up of words on the paper, both traces an act of devotion—Burson’s towards the individuals who wrote the letters—and suggests the incomplete nature of any act of communication.

Burson, who was trained as a printmaker, uses a variety of printmaking processes to evoke the experience of learning of her traumatic family history for the first time. Beginning with covers embossed from a woodblock of the front and back of an original letter, lithographs printed and overprinted with the names of important locations, maps pressure printed from handcut stencils, as well as both reproductions and English translations of actual letters, the book documents the history of Burson's family but also reflects the lives of many others. Even specific materials have special meaning: some of the paper was purchased in Shanghai, for example, a place her grandparents tried desperately to reach.

Ultimately the book does not provide answers; the story it tells cannot be read from beginning to end like a conventional narrative. Instead through its material variety and ambiguity, the combination of opaque and transparent layers that both conceal and reveal, it evokes the impermanence of memory, which can never really be passed on, and the inability of one generation to know or understand previous ones.

The practice of printmaking is at the heart of Burson’s aesthetic efforts. Printmaking facilitates acts of serial repetition, transfer, and transcription that separate the artist's hand from the final artwork, and Burson adeptly employs the medium as both a method of unveiling moments from her family’s past and a recognition of the unbridgeable distance between the artist and her ancestors.